In 2019, we told you about AccorInvest’s partnership with Wheeled World, a project led by Pierre & Myriam, a young couple determined to travel against all odds: Pierre is in a wheelchair… The health crisis unfortunately interrupted their world tour halfway through – but they have turned this obstacle into an opportunity to pursue their goal differently.

Pierre was severely wounded during the terrorist attack on the Bataclan on November 13th, 2015, and he has been in a wheelchair since then. But he and his partner Myriam share a passion for travel, and they won’t let anything stop them! During their first trips with the wheelchair, they realized the difficulties that PMR travellers (People with Reduced Mobility) are confronted with. So they created Wheeled World, the adventure media for all, in 2018. Their goal was to travel the world, live a maximum of “adapted” experiences in all countries, and share their findings with their community – in order to reassure, inspire and encourage people with disabilities to travel.

During 2019, Pierre and Myriam were in Latin America, and they were of course staying in AccorInvest hotels.

Unfortunately, the Covid-19 pandemic stopped Pierre and Myriam in the middle of their world tour a few months later – but they took advantage of the lock-down to step back and re-orient their project. Wheeled World now focuses on France, which produces a more local impact and to is fully in line with the couple’s environmental convictions. ​​​​​​​​​​​​​​

In July 2020, the couple launched “Les Eclaireurs” – the Path Finders – a YouTube series in which Pierre and Myriam share their encounters with people who, in France, make outdoor activities and adventure accessible to all.

Pierre and Myriam have also written a book, supported by their co-author and publisher, to give their two points of view and retrace their story: the Bataclan attack, the reconstruction period, and their travels since the creation of Wheeled World.

“Un Eclat dans le Noir” (“A Spark in the Dark”) was published on October 20th by Fayard. It is surely in your favorite bookstore… 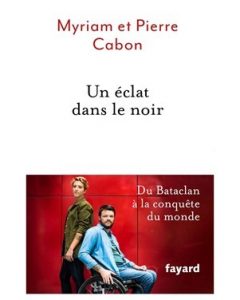