AccorInvest is one of thirty companies creating the #StOpE initiative

On Tuesday 4 December 2018 John Ozinga, CEO at AccorInvest, signed a joint undertaking with thirty other companies and organisations to fight against “ordinary” sexism in the workplace, under the patronage of Marlène Schiappa, Minister of State for Gender Equality and the Fight against Discrimination.

Because 80 %* of working women say they are confronted with sexist conduct in the workplace – those acts, remarks and behaviour which inadvertently or insidiously exclude, belittle and disqualify women in their everyday professional life – the #StOpE initiative aims to share and promote good practices in the fight against sexism and to create a collective of companies and executives committed to this issue.

The work carried out over three months by almost 100 representatives of the operating functions, executives and human resources of these companies and organisations in partnership with Brigitte Grésy, a gender equality expert, has resulted in the publication of a booklet of good practices based on eight key themes. 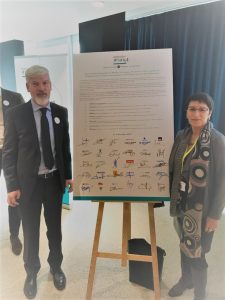 1. Publicize and apply the zero tolerance policy
2. Inform personnel in order to raise awareness of sexist behaviour (acts, remarks, attitudes) and its impact
3. Give training with a focus on the obligations and good practices in the fight against ordinary sexism
4. Provide employees with learning materials to counter sexist conduct in the workplace
5. Encourage all employees to participate in preventing and identifying sexist behaviour and to react in the face of ordinary sexism
6. Prevent instances of sexism and assist the victims, witnesses and decision makers to report and deal with sexist conduct
7. Punish offensive behaviour and communicate on the penalties incurred
8. Measure and implement monitoring indicators to adapt the fight against ordinary sexism policy

The companies and organisations involved will meet once a year to assess the action taken and refocus priority areas according to the progress made in order to keep the initiative in line with current events.

List of the thirty companies participating in the #StOpE initiative: